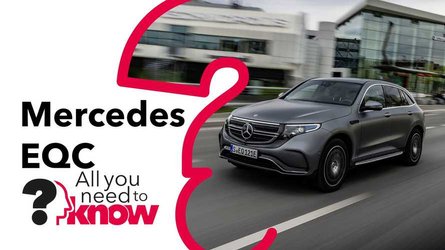 First, Mercedes-Benz invented the car and now it is electrifying the car. Here are five things you need to know about the Mercedes-Benz EQC.

Karl Benz may have created what is generally acknowledged as the world’s first motor car in 1886, but the three-pointed star has since become revered for pioneering more automotive technology, including diesel cars, electronic ABS and adaptive cruise control. Now it’s hoping to lead the electric vehicle landscape, too.

After years of small scale projects including the SLS Electric Drive and the A-Class E-Cell, the EQC is the first mainstream electric car from the world’s largest premium automotive brand. The five-seat SUV is four-wheel drive and based on a heavily modified platform from the Mercedes GLC, though it’s marginally lower, longer and boasts a 500-liter boot.

It has great operating efficiency

An 80kWh battery may not be the biggest capacity SUV, but it does benefit from a 259-mile range thanks to plenty of efficiency technology that increases the car’s ‘miles per kWh’ figure – that’s basically how electric cars measure fuel economy.

This is partly down to both front and rear electric motors providing very different functions: the front has been tuned for better-operating efficiency so provides drive at cruising speeds; while the rear uses a more tightly packed stator to provide greater torque, helping the EQC accelerate from 0-62mph in just 5.1 seconds.

Multiple driving modes and brake regeneration settings help boost efficiency further, including an auto function that uses the car’s cameras, radar sensors and navigation to intelligently predict when it can save the most energy. The driver can even play a role too, following dashboard symbols that instruct you when to lift or coast when going downhill.

It is super refined

Mercedes is famous for creating smooth-riding cars and cosseting cabins, and the EQC is no exception. The aerodynamic body has helped to minimize wind intrusion at speed, while supple suspension ensures the ride comfort is always serene.

It is super safe

Alongside Volvo, Mercedes is synonymous with safety and in addition to a raft of active safety systems including Emergency Brake Assist, the EQC’s battery pack is also narrower than rivals.
It’s been designed to provide an additional 10cm of impact-absorbing structure around the perimeter of the car, so it can perform better in a crash. It also has enough strength to pull anything from boats to horseboxes, with a maximum towing capacity of 1800kg.

Ultra-rapid 110kW charging means that 100-miles of range can be achieved in just 20-minutes, but Mercedes makes charging even easier by providing its customers with a bespoke mobile App.
Not only can it sync with the car’s navigation to calculate your journeys with appropriate charging en route, it also lets you seamlessly use the majority of charging networks out there, consolidating all fees into one single monthly bill.

Thanks for watching. Don’t forget to like, subscribe and comment and let us know what you want to learn more about in the next episode of I speak electric…