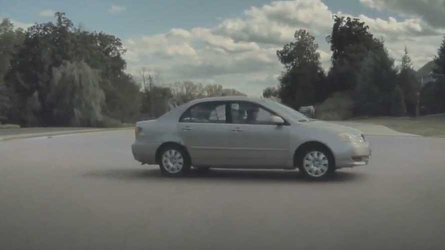 Tesla’s Collision Avoidance System is said to be responsible for the split-second save you see in this video. We don’t know what Tesla model this TeslaCam footage is from, but the maneuver performed is precise, well timed and misleadingly undramatic (the car was reportedly traveling at 55 mph).

It really does look like a calm, calculated driver yanked the wheel left, then right in a very controlled fashion in order to avoid the car that crossed its path. If it’s really the car’s systems that figured it all out and executed it, it’s got to be one of the most impressive examples of active car safety that we’ve ever seen.

The uploader, hmoop, writes in the video’s description that

‘ While my wife was driving our 10-year old to Hockey Practice, Tesla’s collision avoidance took over and saved the day! Had this happened in my wife’s car, both cars likely would have been totaled and the driver of the other car would be in rough shape. ‘

Lower down in the description, he also says that the footage shown here is reason enough to buy a Tesla, then proceeds to leave a referral link there too. This has led some to comment that all of this was staged, and that the uploader just wants his referral link to be used and benefit from that.

And in case you were wondering if the car was on Autopilot when this occurred, and if the steering correction was applied automatically, you can find the answer in one of the comments. One YouTube user asks this question and the uploader replies

‘ My wife was driving. She says she was not on AP or TACC but that doesn’t really matter because this was the Collision Avoidance system. She’s not a good enough driver to steer to the left “into” the oncoming car (AP steered to where the car is, but won’t be, rather than what we humans tend to want to do which is steer to where the car isn’t, but will be). ‘

Now we’ve seen many videos showing similar scenarios unfolding, and we know the car is able to do this on its own. But what do you think? Is this one staged, and a means for the uploader to plug his referral code, or real?

Sometimes in life you need to move a bunch of stuff. Like… WAY too much stuff for one person to

15 Vehicle Innovations Made With Creative Genius