Loss Going Up Vs Regen Gains Coming Down 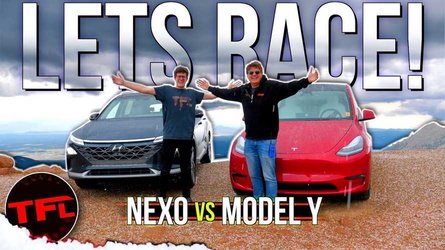 This latest video from The Fast Lane Car, as well as our article here, could have one of about 10 great titles. This is because it’s a race between a Tesla Model Y electric car and Hyundai Nexo hydrogen fuel-cell vehicle. However, it’s actually also an educational piece on fuel-cell technology, at the same time as it’s an educational piece on regenerative braking in electric vehicles.

The main premise here is to head up Pike’s Peak, see how long it takes each vehicle and how much range is depleted, and then head back down. During the trip down, the Model Y’s regen will help it regain some of its range losses.

While this is a race, it’s not about speed. It’s a public day at Pike’s Peak. There’s speed limits, and, of course, traffic. These guys are not going to be able to boast about which car is quicker or more agile. Instead, it comes down to which propulsion technology works best.

It’s important to note that the Tesla can be charged at home, as well as at any Supercharger and most other public fast-chargers across the globe. Meanwhile, the Nexo can only be fueled up in California, making it impractical for most people. However, each technology has its postives, which you’ll learn more about in the video.

Before you watch the video, ask yourself a few questions. Which car will make it to the top first? Which car will be the first to get to the bottom, making it the overall winner? What will each vehicle’s range look like during this battle? And, perhaps most importanly, how much range will the Tesla Model Y get back via regen on the descent?

Now, check out the video for the answers. When you’re done, leave us your takeaways in the comment seciton below.