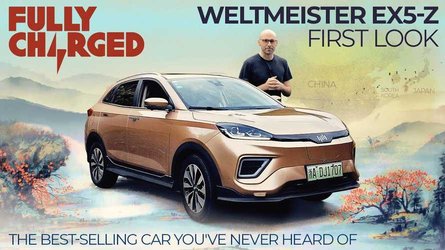 Weltmeister, also known as WM Motor, is an emerging Chinese EV manufacturing company (founded in 2015) that says it has best-in-class proprietary battery management, has advanced self-driving tech and it wants to be a leader in smart connectivity features. It currently has two models in its portfolio, the EX5 and larger EX6.

The former was actually one of China’s best selling EVs in 2019, but also in 2020. According to the company that builds it, the EX5 became the first Chinese-designed and built full-EV to surpass 30,000 units sold. Other local companies have sold more EVs in total, but apparently no domestic manufacturers have sold more of a single model.

So why have Chinese EV buyers fallen for its charms? Well, as this video review by The Fully Charged Show’s China correspondent reveals, the EX5-Z is actually a pretty solid EV with lots of impressive stats, particularly for its price; it starts from the equivalent of just over $20,000 in China (after the local subsidy has been factored in).

What do you get for the money? Well, the base model comes with a 52.5 kWh battery pack that is good for a claimed NEDC range of 400 km (248 miles), but you can upgrade to a 69 kWh pack that boosts range up to 520 km (323 miles). Both variants rely on the same 215 horsepower electric motor for motivation (the power unit is supplied by BorgWarner) and they come with a 6.6 kW onboard charger, yet they take up to 120 kW if a DC fast charger is used.

END_OF_DOCUMENT_TOKEN_TO_BE_REPLACED

JUST IN! Tesla Semi Is FINALLY Here! Late last year, Frito Lay, a PepsiCo company, was due to receive the first 15 Semi units from Tesla, which had apparently begun production at the Gigafactory Nevada. The deadline was later extended back to early 2022, but no...