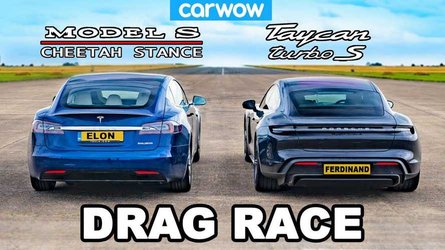 Here’s the ultimate electric car drag race showdown. It’s Tesla Model S Raven with Cheetah Stance versus Porsche Taycan Turbo S. There can be just one winner in this showdown between two of the fastest cars of all time, which will it be?

It’s not like this is the first time we’ve seen some version of the Model S race against a Porsche Taycan and it surely won’t be the last. However, in most of the previous races, a lesser variant of one car was raced against either a top-spec version of the other, or against a lesser variant too. And in others, some possible flaws were pointed out.

In fact, we’ve even seen a Tesla Model 3 Performance up against a Taycan and it came out victorious. However, that Model 3 raced against the Taycan 4S, the lowest variant in the Taycan lineup.

We know the Porsche Taycan Turbo S is insanely quick, but is it a true match for the Tesla Model S Raven with the new Cheetah Stance launch mode? There’s really only one way to find out and that’s to pit the two cars against each other in a fair drag race and that’s precisely what Carwow presents in video form here.

You’ll see several races in the video, starting with some standing-start drag races, followed by some rolling starts at various speeds. No single car wins every race, but one clearly wins the race deemed most important and that’s the quarter-mile.

The Tesla’s received the new Cheetah Stance update, so it’s faster and more powerful than it’s ever been before! As a result, its dual electric motors will put down 825hp and an absolutely huge 1,300Nm of torque!!

As for the Taycan Turbo S, well the stats are actually down on the Model S, with it able to produce 761hp and 1,050Nm. What’s more, it even weighs slightly more than the Tesla! With that in mind, surely it’s the Tesla’s to lose, right?! There’s only one way to find out… LET’S RACE!

How Has It Evolved Over The Years?

The Electric Car Industry Is Growing, And Here’s Why

Next Generation Mercedes eSprinter To Be Produced At Three Sites

Check Out This Tesla Model X Towing A Teardrop Camper