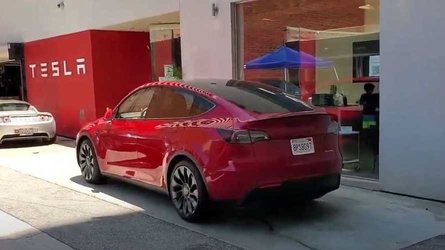 It’s patient, understanding Tesla owners like Andy Cheng that work to help keep the electric automaker successful. While he’s not afraid to share his story, mostly with the hope of helping others, he’s willing to joke about it, and he still loves his Tesla Model Y Performance despite its ‘Lucky Number Seven!’ status.

Back in April, not long after Cheng took delivery of his Model Y, we shared a very brief video outlining his initial problems. We give him much credit for hanging in there this long, though he does say Tesla Service was very helpful and “friendly throughout the whole process,” which made it “more tolerable.” At the same time, it’s crazy to think that on top of all the issues that came straight from the factory, Tesla Service had trouble installing parts and performing repairs without welcoming new problems.

Yes, many of Cheng’s Tesla Model Y service visits were actually to repair new issues that were caused by Tesla Service while fixing another issue. Had he just lived with the initial quality concerns, there would have been fewer overall problems. However, the issues from the factory are just unacceptable and should not be overlooked no matter how much money you spend on a car.

We’d love to be able to say that Cheng’s early concerns were just that, initial quality issues that Tesla has worked to fix over the last several months. However, since Cheng’s original video, which sort of opened the can of worms here, we’ve seen and shared countless videos of Tesla owners having the same problems. Sadly, some are very recent.

Hopefully, Tesla has big plans to make its manufacturing process more consistent. In addition, it seems it could use more emphasis on quality control before these cars ever leave the factory. In the event that something is overlooked or an issue arises after the car leaves the factory, Tesla Service should be trained well enough to consistently fix these cars without adding to the problems. Check out the video and then leave us a comment below.