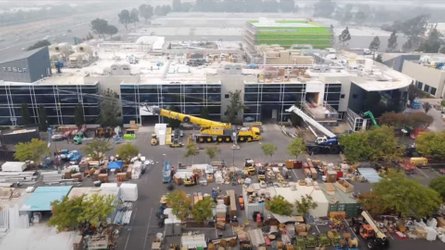 In the video shared above by Teslarati via YouTube channel Gabeincal, we see what’s reported to be the current progress of the facility affiliated with Tesla’s ‘Roadrunner’ project. While we don’t have a lot of details, fortunately, Tesla’s Battery Day is now less than a month away. Hopefully, everything will fall into place once the company makes more official announcements about the project, as well as the facility on Kato Road.

As you can see, the Kato Road facility, which is not far from Tesla’s Fremont factory, seems to be undergoing quite the transformation. Tesla is in the process of adding an additional floor to the building. In addition, based on the multitude of materials in the parking lot, it also appears there is plenty of work planned, or already happening, inside the building.

If you’re not familiar, the Kato Road facility is supposed to house Tesla’s new pilot battery line, which has been referred to as the “Roadrunner Project.” Details were secret at first, but the automaker and CEO Elon Musk have provided some vague details as of late.

We don’t know for sure exactly what Tesla will reveal at Battery Day on September 22, 2020. However, we do know that it plans to begin producing its own battery cells. Musk also said the event might include a tour of the company’s in-house battery facility, though everything will be virtual now, so we’re not sure how that will work out.

According to Teslarati, paperwork has been filed with the City of Fremont that points to the Kato Road facility as the location for Tesla’s Roadrunner project. The operation is anticipated to employ some 45 R&D people and 425 manufacturing workers. Many job openings have already been posted.