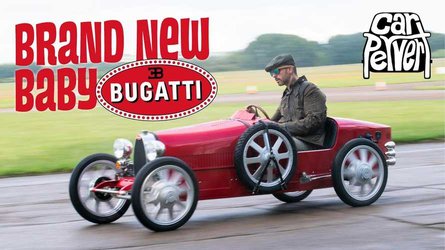 Bugatti is a name synonymous with high end luxury and performance and it’s still a well known brand even in spite of its many decades of hiatus. Most people know more modern Bugattis, such as the EB110, Veyron or Chiron, but discerning connoisseurs will tell you that the company’s heyday was actually before the onset of the Second World War.

Said connoisseur, wearing a tweed jacket and hat, would point to cars like the 1920s Type 35 (and others from the era) as representing the pinnacle of the Bugatti brand. However only 96 were ever built and they can cost close to $500,000 (or even more), so Bugatti has come up with a clever way to make some more of them in order to mark its 110th anniversary.

It has announced that it will build 500 three-quarter size replicas (all of them hand assembled) with a twist: they’re fully electric vehicles. However, they are not high performance vehicles, although they will come in several versions, some faster than others; battery packs are small: either a 1.4 kWh pack with a claimed 15.5 miles (25 km) of range or a 2.8 kWh pack with 31 miles (50 km) of range.

The regular version has 5.4 horsepower and a top speed of 30 mph (48 km/h), but more powerful Vitesse and Pur Sang versions will up that to 13.4 horsepower and push top speed to 42 mph (68 km/h). Bugatti is keen to point out that while these vehicles may be perceived as children’s cars (which they are), adults do fit inside and they are perfectly adequate at carrying adults around.

Jonny Smith, the CarPervert, got behind the wheel of this mini vintage electric Bugatti and he made a video detailing what the experience was like. Spoiler alert, he takes the vehicle up to top speed and also does acceleration runs in it.

END_OF_DOCUMENT_TOKEN_TO_BE_REPLACED

At Sierra Space, we believe space should be for everyone. And that every country and community has a role to play in scientific innovation and participation in the new economies of the future. Because we believe most of all that even as we grow into a space faring...