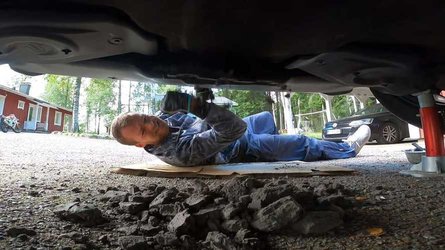 Tesla owner Kuulas posted a brief video on YouTube showing how much dirt and mud has collected in the underside of his Tesla Model 3. He also shows us how to easily remove it. Apparently, the debris has a way in, but there’s no drain, so it doesn’t work its way out on its own.

Some people will certainly say it’s unfair to call this a design flaw, while others, and especially those who have dealt with it, would beg to differ. There are plenty of variables here, so this may not be something that impacts most Model 3 owners, though it may also be something many owners haven’t yet noticed. We do know that several people have pointed out similar issues. One owner removed 30 pounds of dirt after 36,000 miles (see below).

With all of that said, your Tesla could certainly be dirt free. Perhaps these guys drive on dirt roads more often than most? Did they just come back from some hardcore off-roading? Maybe their undertray wasn’t as snug as it should have been in the first place? Some people will even say they took the tray off, filled it with dirt, and replaced it in order to have good material for a video, though we doubt that’s the case.

Here’s the thing. People are experiencing this, and there’s a chance your Tesla has accumulated dirt or water. Not only is this bad for the car, but it can also make noise and add weight. Several pounds of material sloshing around weighs you down and can impact range and handling. The point here is you should check your car to make sure this isn’t an issue for you. If it is, you can easily remove it, and let Tesla know at your next service visit. In the meantime, we can thank people like Kuulas for bringing it to our attention.

If you’ve experienced a similar situation with the Tesla Model 3 or any car, please alert us in the comment section below.

END_OF_DOCUMENT_TOKEN_TO_BE_REPLACED

Looking on their works I can't help but despair. Check out my Patreon: https://www.patreon.com/adamsomething Join my Discord: https://discord.gg/2YcarWsc8S Second channel: https://www.youtube.com/c/AdamSomethingElse source