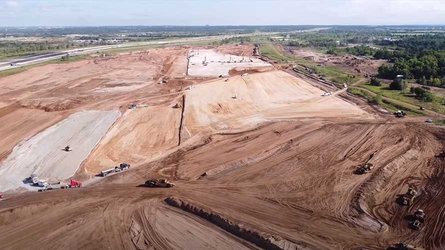 Drone operator and Tesla fan Joe Tegtmeyer posted a video that gives us a much better perspective of the unbelievable size of the work area at Tesla’s future Cybertruck Gigafactory in Austin, Texas, also known as Giga Austin and the Tesla Terafactory. The factory will eventually build the upcoming Tesla Cybertruck and Tesla Semi, as well as the Model Y and Model 3 for customers in the eastern United States.

We’ve been keeping you up to date on the site’s progress since the beginning, and while we knew it was huge, this flyover puts it all into perspective. YouTube influencer and Tesla fan Ben Sullins commented on Twitter, “What other company has people so hyped on a plot of dirt? Pretty incredible.”

Some might call it ridiculous, crazy, or even stupid that Tesla fans are so excited over ground-leveling and gravel application. However, it’s a testament to Tesla’s commitment to the future, along with its rapid pace.

Tegtmeyer says it’s not really possible to get precise measurements. However, he speculates that the leveled area may double in size, growing to about 700 feet wide or larger. The length could be over 5,000 feet.

Tesla has only been working on the site for a month or so. As expected, the progress is notable. Skeptics doubted Tesla would ever complete a Gigafactory in China, and at least one referred to it as an open field of mud. Not long after that, Tesla was building cars in a factory on the site. Again, there are doubts about whether Tesla can pull off Giga Austin quickly due to its immense size and cost. Delays are anticipated as usual, but thus far, it seems progress is already exceeding expectations.

Check out the video and then give us your projections. When will factory construction begin? How long will it take? When will the first vehicle come off the line at Giga Austin? Will it be a Cybertruck?