What’s Not To Like About Tesla Model S? James May Shares 6 Complaints 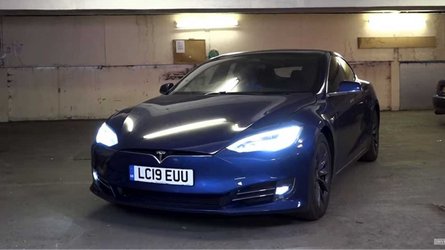 YouTube Channel DRIVETRIBE has kept up with James May’s Tesla ownership with a few videos. First, we learned that May is actually a Tesla fan and interested in the Model S. Then, he took the plunge and actually bought a Model S P100D. That was over a year ago. May loved the car then and he loves the car now. However, that’s not to say it’s perfect. No car is!

James May makes it clear he’s “not a Tesla evangelist or an electric car evangelist.” Instead, he can see the shortcomings of EVs, the charging situation, and the entire segment. However, everything has pros and cons. Here, he talks specifically about some minor annoyances he has with the Model S – none of them are quality or fit and finish issues. These concerns may not apply to other electric vehicles, aside from other Teslas.

First, it’s dirty, but that’s a joke since it’s May’s fault. Next, May grabs the key fob and demonstrates what he calls, “Dodgy Door Handles.” Going forward, he points out the Model S’ “auto off button.” The car shuts off in 30 seconds while May is pretending to open his gate, which is just plain annoying. He says for a “silent” car, the irritating hatch beep is likely to wake the neighbors.

May goes on to say he thinks the graphic design at the rear of the car is inconsistent. While one logo looks modern and fancy, the others are “almost comedic.” Finally, what’s up with the occasional suspension clunk? May is asking you to help him out here. He says it’s not specific to his Model S, but instead, every Model S sedan he’s driven. Hmm …

Have you ever owned a perfect car? What’s the most perfect car you’ve ever owned? Do you currently have a Tesla? If so, share your list of complaints and concerns with us in the comment section below.