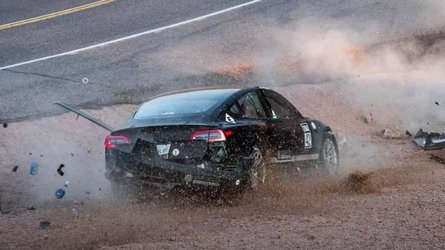 New imagery of that intense Tesla Model 3 crash at Pikes Peak reveals the lead-up and aftermath of the wreck. See what caused the crash and the carnage that followed right here.

As the pictures show, the Model 3 came into a dipped section of the track way too hot. It then basically bottomed out which caused the car to lose control. The car went airborne and narrowly missed a wall. It slammed into the ground and all sorts of parts can be seen coming off the car. You can even see one of the springs in the air. The severity of the crash is evident for sure. However, the driver was okay.

Per Tesla Photographer, the uploader of this video:

A sad moment for the Unplugged Performance team and Randy Pobst. The Model 3 was performing great but at Pikes Peak fortunes can change in an instant.

This particular Tesla Model 3 Performance was being driven by Randy Pobst. It’s the Unplugged Performance Model 3 that seemed most likely able to put down a record time at Pikes Peak.

However, this crash occurred during an initial practice session on the top section of the mountain and it appeared as though the totaled car would be out of any chance of racing at Pikes Peak this Sunday during the main event.

That apparently is no longer the case though as a huge effort to rebuild the car was reportedly successful and it will return to the mountain to race on Sunday. A donor Tesla Model 3 Performance was provided by the automaker and it was used to rebuild this car (VINs must not change during the course of testing and racing at Pikes Peak).

The Unplugged Performance team, along with some Tesla engineers and even Tesla supporters all came together to get the car back in shape for racing in just 48 hours. A miraculous feat indeed.

Stay tuned for more coverage from Pikes Peak tomorrow when the real racing gets underway.