Take A Virtual Ride In This Groundbreaking Electric Hydrofoil Boat 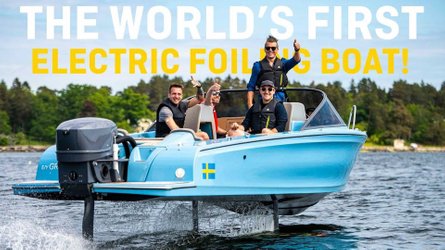 A few months ago, we pointed your attention to the Candela Seven, the world’s first 100% electric hydrofoil boat. Now, compliments of YouTube channel TEAM SUBTECH, we have a fascinating video to share.

The video features six-time Powerboat World Champion Erik Stark. He takes us on a tour of the Candela factory in Stockholm, Sweden, where we get to learn more about the electric hydrofoil and how it was developed. These interesting details come straight from Candela’s founder and CEO Gustav Hasselskog.

Following the tour, we get to go for a test ride with Stark around thousands of little islands in the Stockholm archipelago. According to TEAM SUBTECH, no other electric boat has been able to navigate this far off area.

The Candela Seven’s body doesn’t touch the water’s surface, which means an incredibly smooth ride. The boat doesn’t bounce with the waves, but rather glides above the surface, with its hydrofoil maintaining contact beneath the water to propel it. The foils can extend as deep as 5 feet or retract to have as little as a 2-foot-five-inch depth. This makes it versatile since it can travel in shallow water.

The Candela has a 55kW motor and a 40kWh battery pack. The ultra-light six-passenger vessel can hit speeds of as much as 30 knots (about 35 mph) and travel almost 60 miles on a charge. Hasselskog says its design makes it exceptionally energy efficient. It requires about 75% less energy than a traditional planing boat.

Sadly, the Candela Seven will set you back over $200,000, and it’s nearly sold out for this year. Only 16 have been delivered thus far and there’s already a waiting list for 2021.