With the broader car industry now in recovery mode as the coronavirus pandemic falls under control, and ahead of enhanced EV incentives recently passed by Italy’s government, July monthly car sales figures paint a well known picture of steady growth for electric mobility.

Editor’s Note: This article was originally published on opportunity:energy.

The month of July, start of a new quarter and a “waiting period” in anticipation of upcoming new fiscal recovery measures, was never going to be the brightest month of the year for BEV sales. Nonetheless, official data from Unrae show brilliant results for full electric as well as plug-in hybrid cars, in a car market recovering well from the dismal levels of Spring. A total of 137,000 cars were sold in Italy this month, “just” 11% less than the 154,000 sold in the same period of 2019. As automakers breath a sigh of relief, traditional petrol and diesel engines keep suffering the slow but relentless exodus to electrified options, with sales down 23% and 12% respectively year over year.

Full electric cars achieved 1,608 sales for the month (1.2% of the market), an impressive +70% from July 2019 sales, when 943 BEVs were sold. Registrations were not as high as the top monthly figures from earlier this year, but for good reason: many dealerships were waiting for the new and generous incentive package (up to €10,000 per car), officially kicking in on August 1st. Next month will no doubt see the effects of pent up demand from the government scheme.

Plug-in hybrids, perhaps less affected than BEVs by the anticipation for higher incentives – and now heavily pushed by all legacy automakers – were a big surprise with a total of 2,094 registrations or 1.5% of the market, up a staggering 438% YoY from 389 units registered twelve months ago. With an overall plug-in share of the car market at 2.7% for the month, we can safely assume numbers will further improve during the second half of the year, as long-awaited new EV models also hit the scene. 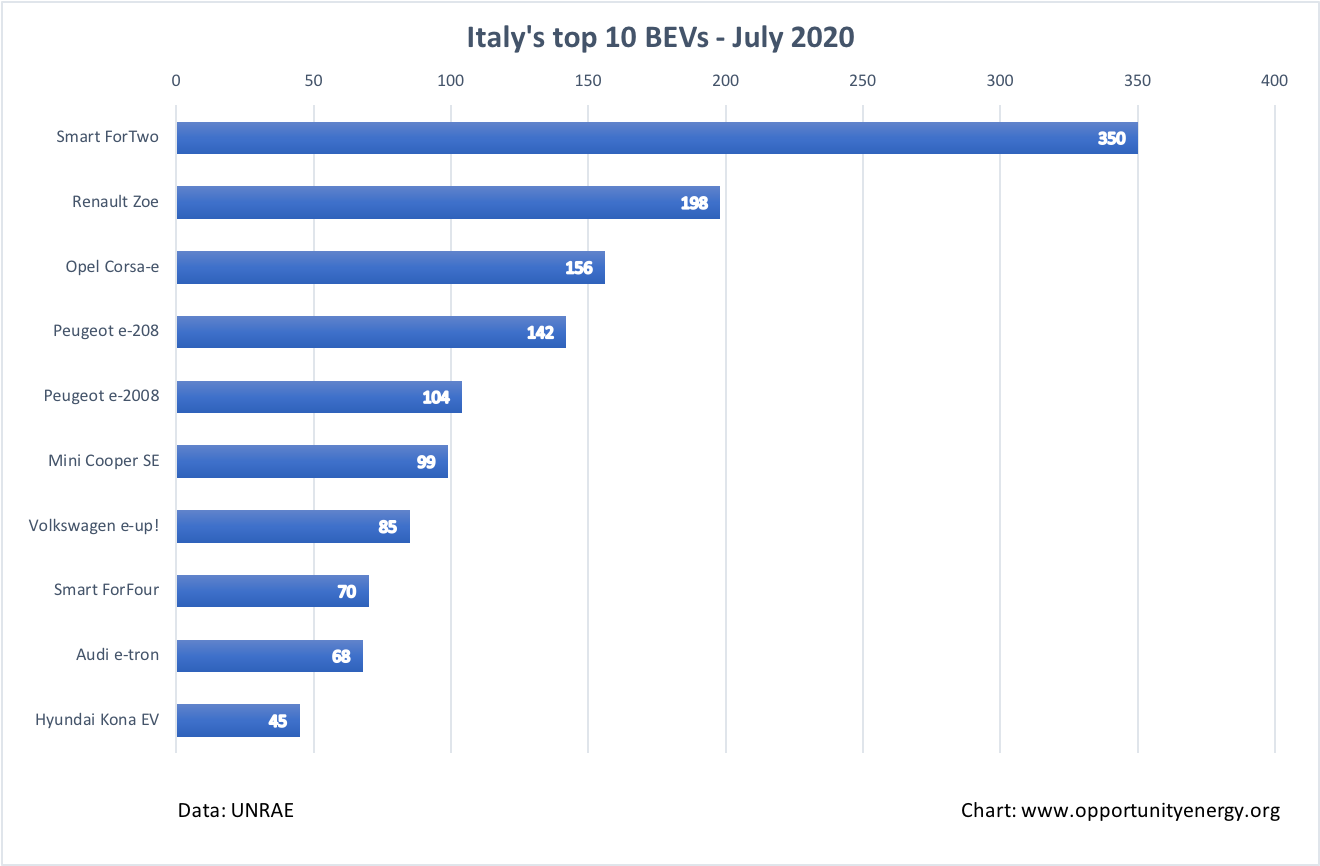 Looking at the monthly BEV Top 10 chart, we are probably witnessing the calm before the storm. Smart ForTwo takes its first monthly crown, with 350 units. Most of the usual bestsellers trail behind at a distance, starting with the Renault Zoe – the market’s No. 1 by far in the first six months this year – at 198 registrations, followed by the Opel Corsa-e (156 units) at its first podium. Peugeot confirms its momentum as e-208 (142 units) and e-2008 (104) occupy 4th and 5th position respectively, giving France’s PSA Group (owner of Peugeot and Opel) three models in the top five spots of the chart.

More compact models fill the lower end of the chart (Mini, VW e-up!, Smart ForFour, Hyundai Kona EV), while the Audi e-tron SUV – with 68 units – makes a rare appearance in a market devoted to small-sized vehicles. More noticeable than Audi’s presence, however, is the absence of Tesla Model 3. Following its June exploit (1st position with 317 registrations), the Model 3 is out of the Top 10 for the first time this year, in what is most likely due to a temporary combination of low inventory, coupled with the wait for new incentives. We can expect the compact Tesla and all other popular models to boast higher numbers as soon as the next monthly update.

Looming new EV incentives in the Italian market have not prevented plug-in sales from posting yet another month of solid growth, amid broad signs of recovery in the wider car market as well as all other sectors of the economy. With the post-lockdown fiscal stimulus now coming into effect, we can anticipate a whole new level of interest in electric mobility throughout the rest of the year, at the very same time when compelling new electric cars are poised to make their market debut. Exciting times!