The old Tesla Model S (85 kWh pack) cars are not charging as fast as they were several years ago, when new. The difference is noticeable.

We know that over time the lithium-ion batteries gradually lose capacity, as well as charge/discharge power output, although the rate of degradation highly depends on various factors, from basics like temperature, through use (how many cycles and what cycles in terms of power, depth-of-discharge), available state-of-charge (SOC) window and on the particular chemistry

Today we will take a look at Bjorn Nyland’s report about charging power fade on the Model S 85 kWh, which in 2014 were good for up to 120 kW, but now owners report significantly lower charging output at Superchargers.

One of the 85 kWh cars, shown in the presentation, charged initially at over 110 kW, but it quickly decreased and the power is usually some 20-30 kW lower than in the other 85 kWh cars back in 2014, used as a point of reference. 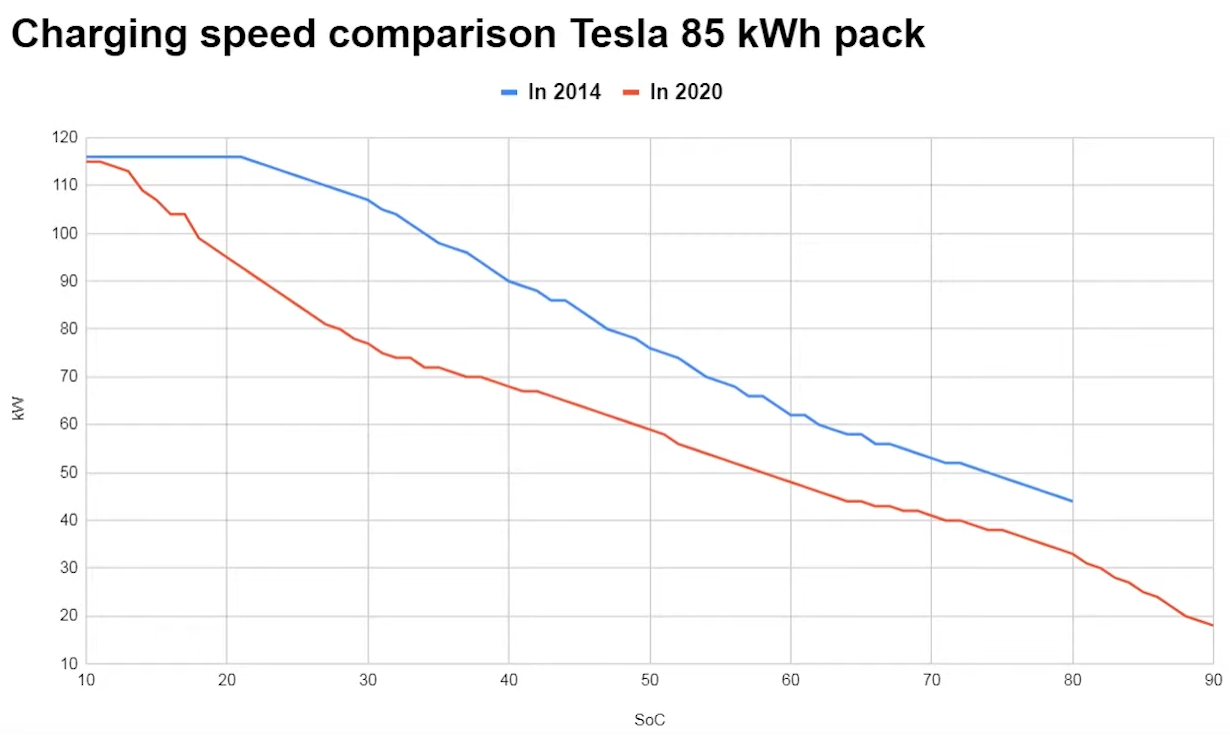 Because of that, charging takes longer:

Fast charging from low SOC to 70-80% may be overall a fifth slower than it was when the 85 kWh cars were new (even if they don’t have high mileage / Supercharging count).

According to Bjorn Nyland, the 85 kWh Teslas are charging significantly slower after one of Tesla‘s over-the-air software updates, which limited the charging output.

One of the hypotheses is that the manufacturer has limited the power output because the number of warranty claims on 85 kWh battery packs was increasing. We don’t have data about how many packs failed, so please leave a comment if you saw any info about this matter.

If the limited charging power will become a common issue to older EVs, Tesla Model S 85 kWh in particular, it of course will affect the second-hand market. Potential customers of used EVs will have to consider whether they accept lower charging speed.

The other thing is that, whether it’s a new policy that manufacturers will over time (without communication) limit some features of the cars for a variety of reasons. It might be to lower its costs over warranty claims.

Tesla Model 3 May Get Tow Hitch In US, According To Hacker Data