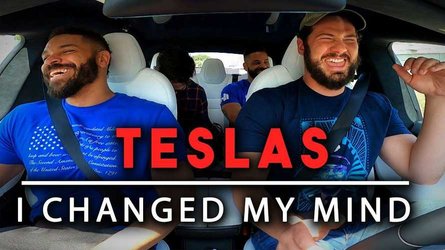 Steven Crowder, a host, political commentator, and comedian, shares his Tesla story. Crowder may be criticized as much as Tesla, who knows. He’s not quiet about his views, and many people don’t agree. Interestingly, Crowder has publicly criticized Tesla and Elon Musk. He hosts a show called Louder with Crowder, and he’s known for his episodes of ‘Change My Mind.’

Despite Crowder’s assumed view of Tesla, all it took was a test drive to sell the man on the car. In fact, he had so much fun in the Tesla, he scheduled a test drive with the Hodge twins who were coming into town. It was after that fun experience that Crowder had to go out and buy one, however he talks about getting it for his wife.

Crowder proves a person can take both sides. He’s a right-wing conservative who doesn’t believe in government subsidies or the tax credit, but he does understand why Tesla gets to take advantage of it, and he still loves Tesla’s cars. While being clear of his views related to Tesla’s “situation,” Crowder isn’t afraid to poke holes in most of the typical anti-Tesla arguments. Most of all, he’s willing to change his mind, which isn’t true of many others.

Like Elon Musk has said, Crowder believes it would be beneficial to let Tesla succeed based on the fact that its products are much more popular and compelling than others’, rather than based on government assistance. Incentives or great for the people that can take advantage of them, but many can’t, and usually it’s those less fortunate. In some cases, there is a good argument to be had about subsidies across the board.

Crowder appreciates that Tesla is based in the U.S., creating jobs, and innovating. It seems he appreciates driving its cars as well.

What Good Is A Smart Charger If It’s Not Really Smart?

Electric Vehicle Sales In Romania Shoot Up 89% In 2020

Romanian car buyers are slowly embracing electric and electrified vehicles as a viable means to get around. Proof is the

StoreDot Made Engineering Samples For Its 5-Minutes Fast-Charging Cell

Hope for the future KS1

Next Honda HR-V will be different for America, possibly all-hybrid