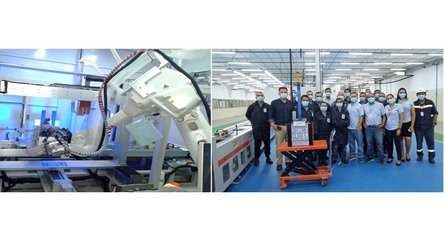 BYD recently started operation of a battery production facility in Brazil where it already has two other factories (for electric bus chassis since 2015 and for photovoltaic module since 2017).

The latest battery plant in Manaus is a rather a small one – 5,000 square meters, with an initial investment of just R$15 million (USD 2.7 million) – and we guess it only makes modules (using lithium iron phosphate – LFP cells), not the cells.

The output will be up to 18,000 battery modules (of undisclosed capacity) per year, including 1,000 in September.

“The factory is highly automated and robotic, ensuring product quality and safety. “We are currently producing 48 battery modules every day. The operation is fast and technical, as here in Manaus we have the infrastructure completely assembled and automated to deliver batteries more quickly and more safely”, adds Tyler Li, Country Manager of BYD Brazil.”

Primarily, the batteries will be used in BYD’s buses. The first project will be batteries for twelve 22-meter articulated buses for the city of São José dos Campos, located in São Paulo state.

BYD sells in Brazil also electric forklifts and built two SkyRail (monorail) projects, so it’s quite a comprehensive approach. So far there is not much demand for electric cars there though.

In total, BYD expanded to 365 employees in several cities and intends to supply from Brazil the South American market.