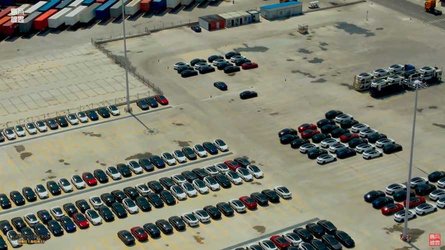 Our most recent coverage of Tesla’s Shanghai Gigafactory production facility focused on Phase 2 construction and the upcoming Model Y. While that’s big news, the factory is currently only manufacturing the Model 3, and apparently, it’s cranking out a ton of them.

As we are only a few weeks away from the end of Q3, it seems Tesla is working to set records once again. Several tweets from Tesla China, as well as a tweeted aerial image and YouTube video from drone photographer Wuwa Vision indicate that the lots at the China factory are filling up with completed Model 3 sedans. If Tesla has enough reservation-holders lined up, these lots could be emptied into owners’ driveways before the close of the quarter.

In addition to the Model 3 vehicles collecting in the parking lots, we also see car carriers loading up and heading out, so clearly many of these cars are already spoken for. As always, it will be very interesting to learn how Tesla’s deliveries stack up in the coming months.

According to Teslarati, this is all happening ahead of the final ramp-up of Model 3 production at Gigafactory 3. Tesla’s Q2 2020 Update Letter noted that the factory is running only two shifts and achieving a run rate of 200,000 Model 3 sedans per year. There is potential for a much greater output when and if needed.

Despite the Model 3’s high price compared to local rivals, it’s already one of the top-selling EVs in China. It seems people are willing to pay more for the car’s premium designation and its healthy assortment of high-tech features.

Will Tesla deliver 500,000 cars this year? How many will it deliver in Q3 alone? What percentage of those sales will be attributed to China? Are we looking at another profitable quarter? Post your answers in the comment section below.