The more vocal was Sandy Munro. He was part of the Tesla Battery Day Postmortem Autoline analysis and said he could not understand the dive after all Tesla presented.

“Maybe Wall Street did not like it, but they look at stuff in an entirely different way. For the people that understand the engineering behind this, this is a big deal. I couldn’t believe it when I saw the stock was going down. That thing should be skyrocketing.”

That is the impression even for people that were not so enthusiastic about the event, such as Simon Moores, from Benchmark Mineral Intelligence. A little after Tesla Battery Day ended, he said Elon Musk had presented “more fantasy and incorrect statements than reality.” Moores told InsideEVs precisely what he meant with that.

“Elon mixed true innovations like the 4680 and tabless battery cell with maybes like Maxwell process and silicon anodes and red flags like its lithium and nickel extraction plans. There was no one clear message and more questions were raised than answered. But that’s unsurprising when Tesla mentioned nine major innovations all at once at the same time as introducing the lithium-ion battery and its supply chain to the mainstream.”

All things considered, Moores did not address the reasons for the market cap loss but made clear that the 4680 cells deserve a lot of attention.

“What investors should take note of is the new 4680 cell and manufacturing process. Before Battery Day, the team at Benchmark predicted that this switch alone could push cell level cost from $97/kWh to between $85-90/kWh. This is a significant leap forward and near term – less than two years.”

Munro seemed really excited about the 4680 cells. Being cylindrical, they can be produced on a large scale, which will bring their prices down. This is what makes them much better than prismatic batteries: their lower manufacturing costs.

“This is a turning point: 50 percent less cost, 59 percent more energy… This is ridiculous! Not only that: it weighs less. All of a sudden, now I can see a $25,000 car that is worth basically driving with this thing. With this (the current 2170 battery), it is too heavy. This is perfect. This is the end of the ice age. I don’t need to have a solid-state battery anymore. I got this thing. With 50 percent weight loss, I’ll take that all day long.”

In our article about the market cap loss, we mentioned Cairn Energy Research Advisors estimated Tesla paid $156/kWh in 2019, but Moores’ numbers are different.

“There are many ways to look at battery cell prices, but our data collected monthly looks at both cost of production and selling price. The average selling price in 2019 was $125/kWh for auto large contact. Tesla’s production cost at Giga 1 was $97/kWh.”

Apply the 14 percent cost-cutting the 4680 cells offer, and we would get to around $93/kWH when you consider Munro’s number. If you prefer that of Benchmark Mineral Intelligence, the cost drops from $97/kWh to $83/kWh. The case is the event did not present only a battery innovation, but a bunch of improvements that can make the price per kWh fall 56 percent. 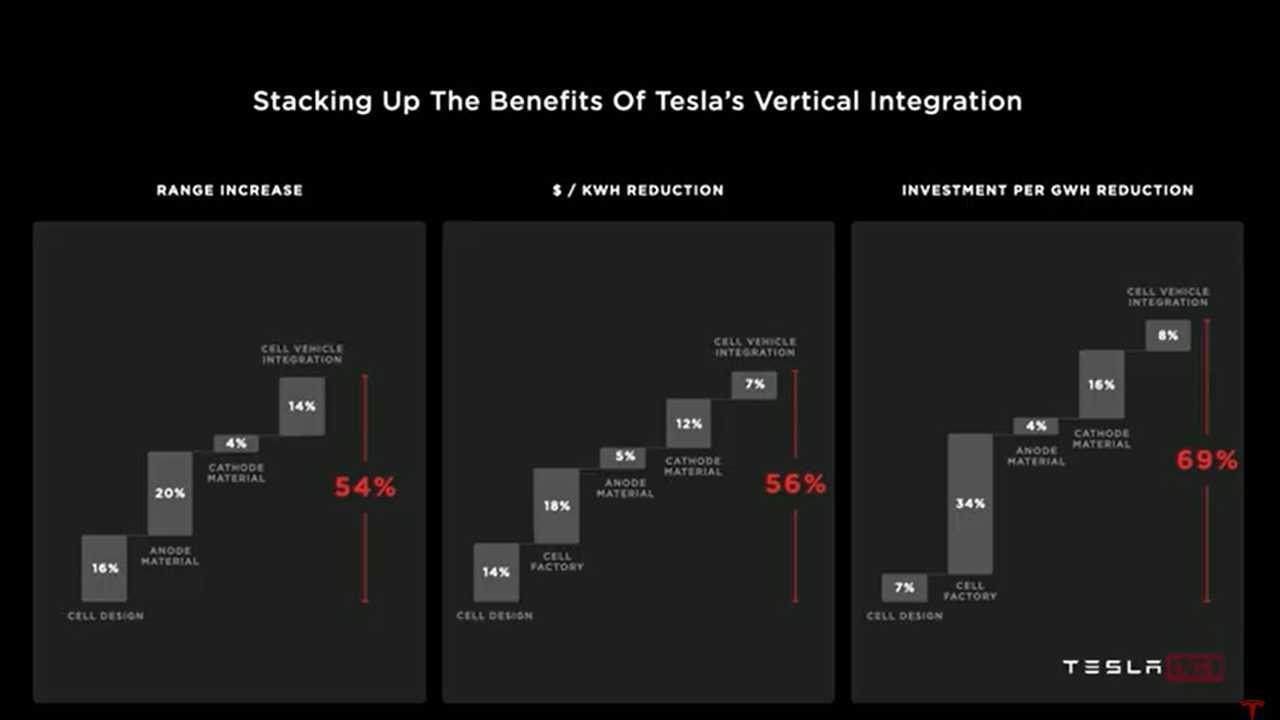 When Autoline placed the screenshot above in their analysis, Munro did not miss the opportunity to show how impressed he was with Tesla Battery Day.

“If I was the CEO of a big OEM, I’d be wetting my shorts right now. (…) That’s the slide that says that, if you are investing in ICE vehicles, you’re screwed. My prediction: 2030. That’s the end. That’s when it is going to flip.”

Bob Galyen, from Galyen Energy LLC, is also the former CTO of CATL. He did not share the same enthusiasm Munro has but still gave the 4680 cells due credit.

“These cells are not new but are used in a new way. They exist since the 1920s, 1930s. What Elon and his team did not mention was that this tabless configuration also helps with the heat transfer characteristics of the cell. If you look at the aluminum and the copper and the way they can put the can together, it is very good design, just applied in a different way, in a different electric chemistry.”

Regardless of that, Galyen may help us understand what probably happened with Tesla Battery Day: too much hype, as Vivas Kumar said in a recent Benchmark Mineral Intelligence webinar. Check what Galyen says in the video above.

Apart from the mistakes that may have happened at Tesla Battery Day, the outcome should have been better. Simon Moores puts more perspective into what was revealed there.

“A number of the upstream claims were borderline fantasy: lithium is just salt, you can wash lithium out of clay with water and salt and use it in a battery, lithium is everywhere, no one has looked for lithium, making silicon for one-tenth of the costs, and silicon is ‘just sand.’

Lithium from clay isn’t a commercial process yet. There are many pioneers who are working on this process so it’s not impossible. But it’s also not as simple to just dig it out of the ground, wash the lithium out, and use it in a battery. There are many extraction, purification, processing techniques, and qualification hurdles to get to that point. The issue here is oversimplificating. It’s an order of magnitude easier to build a battery plant than it is to scale battery-ready lithium.

The upside: even if only a fraction of these innovations happen, the price of the lithium-ion battery will still be coming down. Just not as aggressively as Elon was outlining. But, again, investors need to separate dreams from reality and Tesla Battery Day didn’t do a very good job of that. One thing is for sure, though: the lithium-ion battery is now mainstream.”

“They are talking about being able to integrate these raw materials directly into the battery with very little processing. That’s going to be a big challenge for him and I hope he´s successful. If he figures out how to crack that nut, he’s going to be more wealthy than he is today. (…)

Taking lithium out of clay? This is a new one on me. I’d be very interested to hear how they are going to extricate that lithium conveniently out of the clay and return it back to its original soil.”

The battery veteran also revealed concerns about new mines and

“How long does it take to open a brand new mine? Just going through the federal governments of most countries, It takes an act of God to get a new mine opened up. It’s a real pain to get new mines open. (…)

You’re talking about growing the business to about 3 TWh by the year 2030. Think about the supply base that is currently supplying 100 GWh, 200 GWh, 300 GWh today. You’re going to have to have a multiplier beyond belief for all this supply base to develop the technology to make the products in that kind of volume. It’s huge.”

As we mentioned in previous articles, people that believe Tesla can deliver at least part of what it promised at Tesla Battery Day must be happy with the current stock price. Being lower, it will allow them to buy more shares. For all of them, the name of the game is not a name. It is a number: 4680.

EVs Make Up For Higher Purchase Price Over Time

How has Dubai become one of the most accessible cities in the world? In this episode of Focus, Euronews meets

infinity OPS 2match in one video