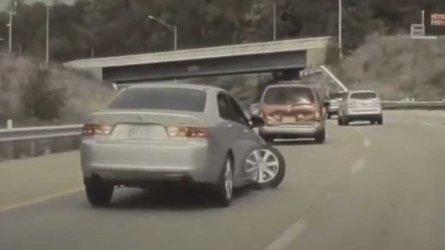 This crazy TeslaCam video captures the moment when a front wheel on an Acura TSX (we think) busts and turns completely sideways. The suspension surely broke and caused this. Could you imagine this happening to you at a high rate of speed? Fortunately, it doesn’t seem as though anyone was injured and the Acura does manage to avoid a wreck too.

The strange sideways-turning wheel event took place in Kansas City, Missouri and was caught on camera by a nearby Tesla.

The most likely cause for this wheel turning sideways is a broken ball joint and/or worn out lower control arm. When completely worn out, the balljoint spindle that inserts into the control arm can fall out and then that wheel is no longer properly connected to the vehicle’s steering system. The friction from the road surface forces the wheel to turn sideways and to make contact with the body of the vehicles.

A broken steering tie rod could be the culprit too.

In more severe cases, or at a higher, rate of speed, the wheel itself can completely detach from the vehicle, which of course is even more dangerous as it becomes a potential damage-causing object on the roadway and the car that loses its wheel comes almost to a dead halt the moment the separation occurs.

Though wild, this wheel turning completely sideways is no match for that Tesla Model Y video in which the glass roof completely blew off just moments after the new owner took delivery of the car. That event likely will continue to be one of the wildest things we’ve ever witnessed and we certainly hope it’s limited to just one Model Y and that it doesn’t become a common occurrence.