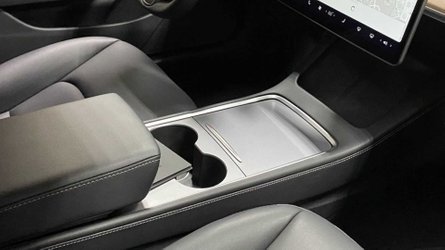 Some spy shots taken at Tesla’s Fremont factory in California show a Model 3 that looks refreshed, though we’re well aware that CEO Elon Musk says Tesla never refreshes its cars. You can refer to them however you choose, but they’re visible changes, nonetheless. The most obvious is the exterior chrome delete that looks much the same as that of the Tesla Model Y.

UPDATE: Above you can see what appears to be an official image of the refreshed Tesla Model 3 center console. It first appeared on the Tesla Owners Worldwide Facebook group.

We sometimes hear about Tesla making changes to models overseas, but many times those changes don’t make it to our shores. According to Teslarati, the China-made Model 3 is getting the chrome delete, a powered trunk, a new steering wheel, and an updated center console, among other things. Electrek reported that it has received official information that the latter updates, as well as those seen on the Model 3s at Fremont, are planned for U.S. cars.

No official images have been shared, but Tesla-fan Twitter account @WholeMarsBlog provided a series of shots in several tweets.

Above is a comparison of the Model 3’s current chrome trim to the chrome-delete refresh.

The pictures were reportedly taken in the Fremont factory parking lot, and the Model 3 appeared to be a Euro-spec edition. As you can see from the photos above, the new center console may finally do away with the piano black finish.

Since the Model Y arrived, people have questioned whether some of its advancements would eventually make their way to the Model 3. The heat pump is especially critical for people who live in colder climates. While some people may like the look of the chrome accents, “blacked-out” vehicles are very popular these days. It would certainly be nice to have more options.

Tesla has a reputation for updating its cars constantly via over-the-air updates. It also makes hardware changes when necessary. The automaker doesn’t rely on traditional model years, refreshes, or complete redesigns. Rather, it improves its cars randomly (and often quietly) when needed.

Chevrolet Bolt EV Battery Recall Will Cost Over $11,000 Per Car?

how different people get off there hoverboards

0
The Week In Reverse

Showing how to charge a hoverboard and using my skateboard 🛹