Check Out This Ridiculous Road Rage Accident Caught On TeslaCam 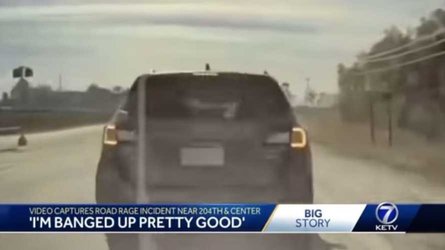 As you can see from the newscast and video, a road-raging SUV driver intentionally causes this Tesla to slam into the back of it. Thankfully, the incident was caught on the Tesla’s standard, built-in dashcam (TeslaCam) and everyone is “mostly” okay after the crash. However, the Tesla owner says he’s “banged up pretty good,” and his car is as well.

According to the police that handled the incident, it could have turned out much worse. The TeslaCam video helped them figure out exactly what happened. In fact, one of the officers credits the technology for helping the investigation. Driving behavior like this can result in death. Essentially, you’re using your vehicle like a loaded gun.

Typically, in a road rage incident like this, it’s one driver’s word against the other’s. However, deputies watched the entire footage of the road rage situation and the crash to learn who was at fault. It’s clear in the video clip that the Subaru driver swerved directly in front of the Tesla and then slammed on the brakes.

We don’t get to see how everything played out, but the Tesla driver says he passed the Subaru and the driver was clearly upset. The police heard two completely different stories from the drivers. However, when they watched the video, it was clear who was at fault. We’ll remind you that with incidents like this, we often never know exactly what led up to the road rage, but it honestly doesn’t matter. Even if someone upsets you on the road, intentionally or unintentionally, you can’t try to kill them.

Sadly, the SUV driver only got a ticket for “willful reckless driving.” You’d think he’d be going to jail for that behavior, however, we won’t pretend to know how the law here works, and we don’t know exactly what contributed to the police officers’ decision to simply issue a ticket.

END_OF_DOCUMENT_TOKEN_TO_BE_REPLACED

#VehiclesofFuture #futurecars #futurevehicles #futuretransportation #enventions Transportation is undergoing one of the biggest transformations in history. Companies are investing in new ways for humans to get from point A to point B more efficiently. Here's a look at...