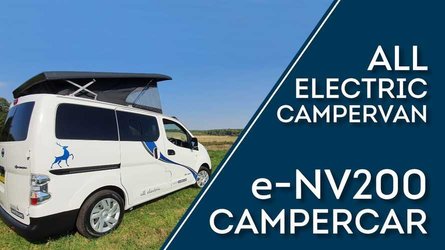 The Nissan e-NV200, the electric version of the NV200 commercial vehicle, has been around since 2014, but the automaker did upgrade its battery pack once over the course of its life. Capacity was increased from a measly 24 kWh to 40 kWh in 2018, thus making the van more useful in roles other than in-city delivery – many have been turned into campers.

Even with its relatively limited range (even with the bigger battery, it’s still only 200 km or 124 miles WLTP), e-NV200-based camper vans are more popular than you may think (at least in the U.K.). The latest company to offer one is Sussex Campervans whose offering wants no longer has any gas on board, not even for cooking.

The people behind it say the goal behind it was to make it completely fossil fuel free. Interestingly, knowing that whoever buys this will require more electricity while actually camping in the vehicle, Sussex Campervans opted to fit it with a secondary lithium-ion battery pack specifically to run appliances.

It is charged separately, through a port located in the front of the vehicle, next to where the factory one from Nissan is located. However, they are wired completely separately and also charged separately; the secondary pack can only be charged via a standard European 220 – 230 volt outlet, or it has been designed to also be able to be charged via solar panels (although you’d need a separate array, since one is not provided).

The rest of the package is traditional recreational vehicle fare – the interior has all the amenities you’d want in a home away from home and its only real problem is you can’t really drive it particularly far off the grid, due to its limited range. Currently, the e-NV200 Camper Car is offered from £59,995 (just under $80,000), or around £20,000 more than a comparable gasoline-burning variant.