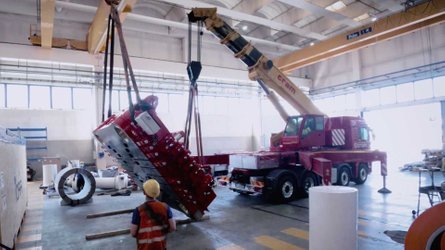 In the past, we shared with you the giant IDRA Giga Press, which allows Tesla to manufacture large, single-cast parts for the Model Y electric crossover. This recent video, uploaded by Foundry Planet, shows the Giga Press being assembled.

It’s crazy that the Giga Press actually is almost the size of a small house, as CEO Elon Musk has stated. In fact, YouTube channel Foundry Planet says it takes 24 flatbed delivery trucks just to move the components to the site. The Giga Press measures 20m x 7.5m x 6m and weighs in at 430 tons.

According to Teslarati, two IDRA Giga Press machines have already been constructed at Tesla’s main factory in Fremont, California. However, similar to previous years’ “tent” situation, the machines weren’t able to fit inside the facility, so Tesla had to build additional structures to house the Giga Press machines. The story also says IDRA has 12 outstanding orders for Giga Press systems.

The video shows IDRA Giga Press number 3 being assembled. However, we don’t know where the large machine will be located, though filings do indicate that Tesla will need eight of these machines for its upcoming Gigafactory near Berlin, Germany. While it may seem early for the first Giga Press to be heading to Giga Berlin, Tesla is working quickly to get the structure completed.

Tesla’s Shanghai Gigafactory also has similar Giga Press machines, but they’re not IDRA-branded. Instead, reports say they’re made by LK Machinery. There were three Giga Press machines installed at the factory in China as of October. Do you think Tesla’s manufacturing will push it ahead of the competition into the future? Let us know in the comment section below.