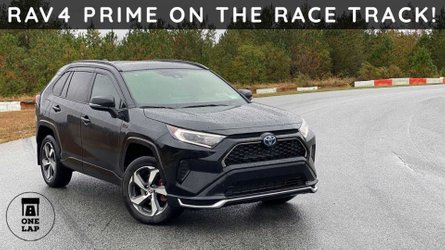 Despite being a largish crossover SUV with some off-road chops, the new Toyota RAV4 Prime is fast. Where quickness is concerned, only the Supra sits above it in the Japanese automaker’s lineup.

It’s great, then, to get a chance to see how it performs while completing a lap of the 2-mile One Lap race track. While we know it’s quick in a straight line, trying to keep that speed as the roads twists left and right could be illuminating. Especially considering the engineering of the powertrain.

The front wheels of the RAV4 Prime are powered by its internal combustion engine and a small integrated starter/generator electric motor, while its rear wheels are powered exclusively by an electric motor. How it handles is greatly determined by how these two disparate systems work with each other.

Our host in this video is Kyle Conner. It is, he says, his first time behind the wheel of this plug-in hybrid, so we can easily imagine his reactions are genuine. This would include his response to how the vehicle pulls as he keeps his foot to the floor after leaving the starting line – impressed!

Speaking of that start, it’s interesting to note that, despite turning off traction and electronic stability control, and being in sport mode, the traction control seems to turn back on in an effort to keep the wheels from spinning on the wet asphalt as the crossover leaves the line.

With the lap underway, the Conner reports that it has a nice balance that helps it turn well. It does, he reports, have a bit of body roll, which is to be expected. The steering is “really good,” but again, it’s the sheer power of it it that impresses Conner. At various points under power, traction of some of the wheels is lost and they spin up.

The RAV4 comes across the finish line at an impressive 101 miles per hour. It’s final lap time was less impressive, however, at 2:08. That places it ahead only of the Toyota Prius Prime and a 2018 Jeep Wrangler Sahara Unlimited. Of course, had there been a dry surface beneath its wheels, it surely would be substantially faster around the course. Hopefully, there will be a drier “next time.”