Another week, another new electric crossover. That seems to be the story as automakers big and small around the globe try to stake a piece of the market’s move to electric vehicles. The small (limited lineup, no trucks) car company Mazda showed off a new electric version of its small MX-30
crossover this week, promising that it would be available in California
dealerships this fall. 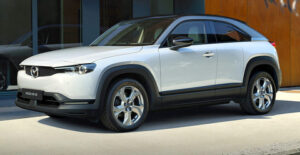 The MX has a distinct style

Mazda said the MX-30 EV would be characterized by its “stylish” design and a driving experience that fits the brand’s performance image. The latest iteration of Mazda’s Kodo (“Soul of Motion”) design philosophy aims to blend minimalist elements with a futuristic design. The result, at least as can be discerned from the company photos released, is a smooth-sided car with a bit of a retro look, reminiscent of some models like Nissan Cube or Figaro or the Honda E. It contrasts with the more sculpted look of the current gas-powered CX-30.

Performance may be a bit more of a stretch for the MX-30 EV.
According to Mazda, a single electric motor rated at 144 horsepower and 200 pound-feet of torque will power the vehicle’s front wheels. That compares with the nearly identical CX-30’s base engine 186 horsepower/torque, but trails the turbo-engine versions 250 horsepower and 320 pound-feet of torque. We found the CX-30 base engine performance to be adequate, but the car’s suspension gave it credentials to be a true driver’s car.

The electric Mazda was first previewed at the Tokyo Motor Show in October 2019 and is already on sale in Europe, so the real news here is that it will finally be going on sale in the U.S. Mazda touted its fast-charging capability (20-to-80 percent charge of its 35.5 kilowatt-hour battery in 36 minutes with a 50 kWh charger), which compares favorably with some of its rivals, but it doesn’t appear to have the ability to charge at the higher rates some newer fast-chargers offer. Mazda is partnering with EV charger company ChargePoint to offer home charging options for MX-30 buyers. 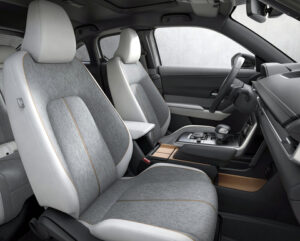 The MX-30’s range was not announced. The European version reportedly is rated at 124 miles, but EPA testing usually delivers numbers substantially less.

Mazda’s announcement also included a preview of some additional MX models that will follow, including a series plug-in hybrid that uses a rotary engine as a generator as well as a traditional hybrid. The use of the rotary engine should excite some enthusiast who are enamored with the engine’s unique design and smooth power. Mazda deployed the Wankel rotary in
models from 1967 through 2011.

Inside the five-door MX-30 you’ll find a typical Mazda driver-oriented layout with control laid out for easy use while driving. The car will feature a floating center console and other areas that use cork, a renewable and eco-friendly material that also hints of Mazda’s origin as a cork manufacturing company more than a century ago. That console features an
electronic shifter, a multi-function “commander” knob and shortcut buttons to control the Mazda Connect infotainment system. A 7.0-inch touchscreen provides access to the car’s various functions.

Mazda Connected Services will allow owners to monitor and control various functions of the car remoted through the MyMazda App. Owners
will be able to lock and unlock doors, adjust the climate control and checking on the battery status/charging status through the app. 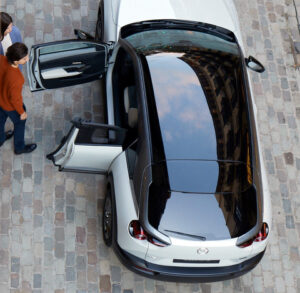 The MX-30’s five doors may be one of its more unique features. Its rear doors are described as “freestyle,” which means they are rear-hinged
so they are center opening, allowing greater access to the rear space. That
said, they’re not full doors like those found on the CX-30, so will present a
new process for those who’ll be using the rear seat.

The car will come with a full suite of advanced safety equipment. We look forward to hearing more details, such as EPA-rated range and pricing plus getting behind the wheel of this new entry to provide readers with a full report of how it stacks up in the expanding world of electric crossovers.